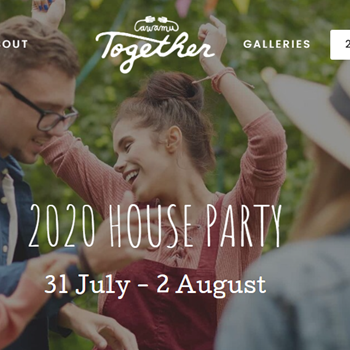 Last month we wrote about the growing number of live events taking place on the web as a much needed pick-me-up for the many thousands who are unable to go out to clubs and festivals due to the ongoing COVID19 crisis. Now we are deep into the summer months, that desire will be stronger than ever as the masses headed off to sunny (or rainy) festivals, Ibiza and countless other parties, many of which may not return in 2021. There is much activity on the web and thankfully the internet has proved to be a lifeline for some promoters, artists and clubbers. We’ve already seen inventive artists and promoters transport themselves onto a virtual environment and as a result raise valuable income and money for themselves and charities. A virtual music event can never replace the euphoria and energy of an actual live experience , but it’s somewhat much better than a total live music blackout. We’ve scoured the web to find some of the latest events you can enjoy from the comfort of your own home or garden this summer, in addition to a couple of cool ones you can actually go to with friends.

Sadly, like all UK Festivals, Awamu’s small but perfectly formed festival has been postponed until 2021, but they’ve put together a line up of DJs and artists for 60 hours of non stop online entertainment. The Amamu Together festival was established as an annual fundraising party with all profits going to the Awamu Charity. This is to help support the most vulnerable women and children in Kampala, Uganda - they like to call it ‘fundraving’. With over £55,000 raised so far, they will be bringing together a stellar line up with DJs from the brilliant Purple Radio crew, Together artists, family fun and yoga. This again is all in aid of their charity, they hope to raise £5000 and already have got more than 20% of the way there. We implore that you go check them out over the weekend and show some love and support to this great cause and very cool event. 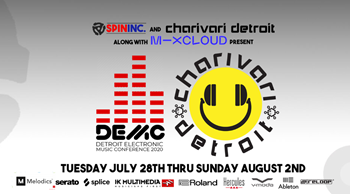 Now in its seventh year, the Charivari Detroit Music Conference takes place solely online this year with a big line up of DJs and free educational programmes. Supported by Spin Inc and hosted by Mixcloud, this is not just a party, so expect a plethora of tutorials and classes in among the DJ sets. Legends of the Detroit scene Eddie Fowlkes and Terrence Parker are just two of the many artists involved over the course of the four days. 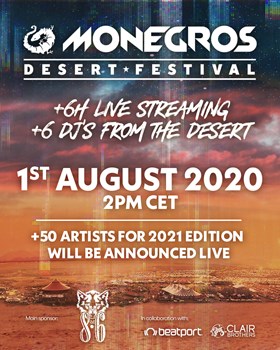 Monegros is another festival that sadly had to cancel this year, which was a particular shame as this was their first event since 2014 and their 21st version of the popular Spanish rave in the desert. The likes of Adam Beyer, Basement Jaxx, Richie Hawtin and Vitalic had all been booked to play. Fear not as the festival will be running for six hours from Saturday afternoon with six DJs behind the decks and a live announcement for who will be playing at the festival in 2021. There are no exact details about the event at present, which is in collaboration with Beatport, so keep your eyes peeled for details coming up. 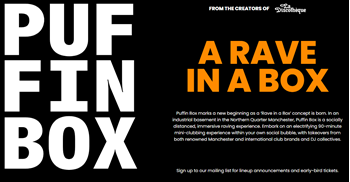 Brought to you by the creators of La Discoteque, Rave in a Box is a concept that has been born on an industrial basement in the Northern Quarter of Manchester. The promoters describe Puffin Box as a socially distanced, immersive raving experience. On arrival you are taken to a 90 minute mini-clubbing experience in your own social bubble with takeovers from club nights and DJs from Manchester and further afield. Future guests include PBR Streetgang, Crazy P, James Holroyd and many more. As with many nights like this, a lot of care has been taken to ensure the safety of staff and guests but also maximum enjoyment in these testing times. 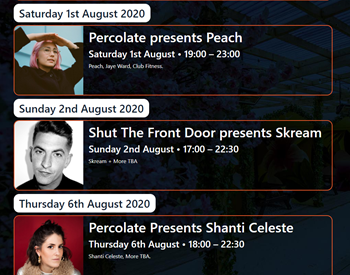 Despite the lockdown and the problems facing many venues, there are some who have been able to adapt over the warmer summer months and The Brixton Courtyard is one such example. Naturally venue capacities have been slashed and so has income but it’s been great to see some places open with various safety measures in place. Operating for much of the week, you can expect quality DJ sets from the likes of Shanti Celeste, Dusky, Ross From Friends, Horse Meat Disco and Moxie playing over the next two months. Booking is essential and is by the booth for groups of 6 and 12 with all booths under cover, so even with a typical British summer, you’ll be kept nice and dry. There will also be a number of street food options available.

No doubt as the summer goes on, more events will crop up and there’s no doubt that more inventive ways of organising events will start to appear. The creative industries have been one of the hardest hit sectors due to the pandemic but they’re also one of the best placed to come up with inventive ways to connect and entertain people. Hopefully more club and live music life lines will appear soon and ultimately normal service in 2021.

A homage to the backroom DJ

There have been many unsung heroes in dance music history but none so greater than the humble backroom DJ. They are in among the many personalities that make up the effective running of a club, promot..