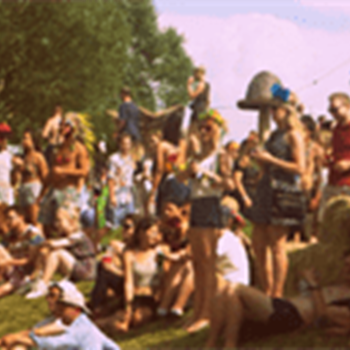 Even though I'm writing this in the midst of a very heavy rain shower that seems to have lasted most of the last 24 hour hours, we have a lot of great summer festivals just around the corner. With any luck we will have some great weather this summer for revellers to soak up the sunshine and hear some awesome music drifting through the hills and valleys. It is over two decades since Glastonbury formalised the appearance of dance music on the festival calendar and in that time dance music has become a regular fixture. This week we pick a few of the best line ups for UK based festivals that cater for the electronic and dance communities.

Glastonbury always sells out in the time it takes for Liam Gallagher to fall out with his brother Noel at a family gathering. Nonetheless as the world's most famous arts festival puts increasingly more effort in the dance and electronic area, so we thought we would highlight a few key attractions for anyone lucky enough to have obtained a ticket. There are quite a few big hitters from the dance community this year with Chic, Leftfield, Justice, Goldfrapp and DJ Shadow all worth watching. Further afield at Silver Hayes you can catch the talents of Sister Bliss, Fatboy Slim, Shy FX, Mylo, Seth Troxler and Jackmaster among dozens of other live acts and DJs. With TV and extensive radio coverage you can at least get some of the good vibes in your living and possibly miss the rain and mud. 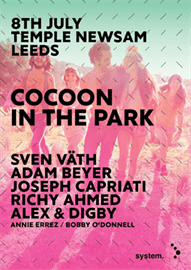 (c) Cocoon in the Park

Following up from last year, Sven Väth's one day party returns to Leeds with another sterling line up with the main man joined by Adam Beyer, Joseph Capriati, Richy Ahmed, Alex & Digby, Annie Errez, Bobby O'Donnell. At the time of writing the first two phases of tickets had sold out and you might just find yourself with the final release tickets if you are not quick. Cocoon in the Park started 2009 as a collaboration between Vath and the Leeds based team behind Mint Club and Mint Warehouse. The open air event has just one stage and offers just pure dance music and state of the art visuals. You can also buy your tickets with coach travel from Hull, Newcastle and Manchester to save you the pressure of driving there.

The Secret Garden Party comes to an end this year sadly, after first appearing on the festival calendar in 2004 it had gained huge momentum. It has built a reputation as one of the leading music festivals in the UK and rightly so. The finale promises to be an epic one and brings together the likes of Crystal Fighters, Metronomy, Zero 7 and many more quality acts for one heck of a party. DJ duties are picked up by luminaries including the reggae selector legend David Rodigan, Luke Solomon, Stanton Warriors and quality tunes from ex-snooker star Steve Davis. It will no doubt be a very emotional scene once the curtain finally falls on possibly the most famous garden party of the 21st Century, but no doubt something equally euphoric will take its place.

Another one day dance festival and new location for the house and techno event. With seven stages and tents to choose from, you will not be short of finding something of your liking. Techno and house legend Carl Cox heads the main stage supported by Darrius Syrossian, Nick Curley with more names to be added. Other headliners across the various areas include Chicago house legend DJ Pierre, Steve Lawler, Terry Farley, Skream and Hot Since 82. No doubt that this festival, like so many will sell out - (it was close to doing so as I write) and being based in central London will attract a huge number of house and techno heads to this popular event.

Having the luxury of being based in London and on the last Bank Holiday weekend of the summer it means you can party hard and still take Monday to recover. Featuring some of the heavyweights of the commercial dance community there is something for most dance fans. With Pendulum, dance music collaborators Sigma and Gorgon City, veteran drum and bass producer Sub Focus and Ram Records Wilkinson all delivering live performances. The DJ duties are taken care of by Marco Carola, Deadmau5, Eric Prydz, Sven Väth, Marshmello and Eric Morillo among others.

The biggest and best dance festival in the UK returns once again with an incredible line up of live acts and DJs over the course of four long days and nights. Spread across almost a dozen areas you can catch the cream (excuse the pun) of dance music in the open air. Creamfields sets up a marathon session only for the hardcore as things kick off on the Thursday with a few of the areas opening up for those keen to start festivities. Friday cranks up the heat with Seth Troxler, Andy C, Armin Van Buuren and Sigma among many others. Saturday sees Deadmau5, Diplo, Stormzy, Pete Tong, Laidback Luke heading up some of the areas and a UK exclusive performance from Richie Hawtin. There is little rest for the wicked on day four as Hardwell, Fatboy Slim, Steve Angello, Eric Prydz, Paul Van Dyk as well as Hollywood star Idris Elba shows off his deck skills. There are also DJ sets from Chase & Status, Pendulum and Faithless to carry the festival to its euphoric climax. There are many ticket buying options depending on how many days you want to attend.

Discover great digital music for your next festival with Trackhunter

A few weeks of overindulgence and partying hard usually mean a few half-baked resolutions to lose weight, learn a new language and be nicer to people. For the hard working DJ the festive period can ta..

The best UK dance and electronic festivals for 2019

Each year we dust off the Trackhunter tent and sleeping bag and head off to seek out the best UK dance festivals and parties in a field. Again it's another busy festival year ahead and there is no sho..

The best UK dance and electronic festivals for 2018

I sit writing this latest Trackhunter blog post whilst finding myself in a steaming hot room at the back of my house looking out onto a sunny garden and thinking of summer festivals. Each year the dan..