Boiler Room among other platforms have become renowned for tying together the visual and audio cousins of dance music. Clubbing is a very visual experience, there are flashing lights, the DJ performing and of course other people gyrating to the beats. Whilst it is pretty impossible to transfer the full intensity of a club night, even with something such as virtual reality, to someone else's living room; there are merits of broadcasting your DJ sets to your friends, fans and the world. In this latest Trackhunter blog post we will look at some of the better options for streaming your live set over the web and give a few reasons why it's good to do this.

All eyes on the DJ

Some may question why you would want to videocast your DJ set, even something as polished as Boiler Room can be seen as self indulgent, pointless and full of self important people all trying desperately to show that they are having a good time. There might be some truth in that with some of the sessions but such as the sets by Nightmares on Wax, Peanut Butter Wolf and Derek Plaslaiko are all stripped of the backing dancers and flashing lights to make for really good visual journeys by DJs.

Reasons to get visual

There are two main scenarios why you might consider live streaming your DJ set, both have pros and cons. Firstly there is the club setting and this is harder to achieve if you are unable to get in early and set up and there other DJs to take into consideration. Nevertheless with a good phone connection and interested social network you can broadcast your set on the fly. The other option is at home where you might be delivering a regular radio show or wish to show off your technical skills to anyone passing by on the web. The real value in using such as Facebook Live or Meerkat for Twitter is that you are likely to have friends or followers watching their social stream when news of your DJ set pops up. That way they are more likely to dip in and out of your set rather than you plan something way ahead and then forget when it doesn't appear in their timeline.

Broadcasting across the web with video is likely to eat up your phone or tablet power so it is important you start with a lot of battery power and if possible have your device plugged into the mains. Connectivity is also quite important as broadcasting video across the web needs a really good 3 or 4G phone signal with almost full signal or reliably good wifi. Sound quality is also quite important, and there are several ways you deal with this. For many DJs, even those DJing on radio shows stick with just using the live monitor feed from the speakers to the device's microphone to provide the audio. Despite being far from perfect it does not sound too horrendous. The bigger problem is that the microphone also picks up everything else in the room, chatter including foul language if used, bodily functions and other external noises. This option is easy to set up but not so comfortable or relaxing to execute. The next option is to use a cable such as the Rode SC4 which will cost less than £10. This allows the microphone to be activated on such as an iPad or iPhone for Facebook Live. This works very well but have no limiting capability it can be easily overloaded. Once the signal is overloaded it causes the audio on the broadcast to cut out and if you are not monitoring the output you won't know it has cut out. You can get around this by lowering the volume of your mixer master output and turning up the amplifier volume to compensate, but it is not ideal. The next solution involves spending a bit more money but will remove the problem of overloading the audio output. The Novation Audiohub 2x4 Audio Interface is a very good option but you might want to think about whether you will use it enough to justify spending over £100 on it. For anyone only half serious about broadcasting on such as Facebook Live you would be better just starting with the Rode SC4 and then moving up to something better later on.

How you connect from your mixer to your device depends on how many outputs you have on your mixer. If you have two master outputs you can use one to deliver the audio to your tablet or smartphone. If you only have one you can pick up an audio splitter from your local or online DJ store depending on the connector whether it is a jack or rca socket.

It may also be important in some club settings to check with the promoter that you are OK to broadcast before you start. They may not take likely to you sharing their event with the wider world free of charge. On the flip side there is also the promotional element that people might want to come to the club after getting a visual and audio taste of it over the web.

The cameras on mobile devices have improved over the years but nevertheless it is important to maximise the quality of your broadcast. A good idea is to invest in a snap on lense for your device and if possible spend a few extra pounds to get a good quality one. The Topop Fisheye Lense kit, 3 in 1 is a very good option for about £15 it gives you three really good quality lenses and a case to keep them in. You can purchase lense kits for a lot less but you will notice the cheapness and lack of quality. The Topop kit also comes with a good quality case rather than a pouch that comes with most of the cheaper models.

There plenty of platforms you can use to video broadcast your set across the web. If you do not have a tablet or smart device but a laptop and webcam then something like uStream will do the job just perfectly. For the purpose of this post and broadcasting with your mobile devices the best three options at present are Facebook Live, Meerkat and Periscope with Twitter. Whilst Google is catching up via their Google Hangouts on Air and their live streams they have yet to really embed this within social media in the same way Facebook and Twitter have. Google+ has struggled to reach the kind of numbers compared to its competitors but YouTube and live streaming options could still become dominant in this area over time. Facebook Live is simple enough to set up you just decide on whether to deliver a live or scheduled "Live" update. You get a few seconds after pressing start before the whole thing goes live and it will record the session giving you the option to post it on your timeline afterwards. One consideration and this will happen more as increasing numbers of DJs will turn to this tool is that Facebook may prevent you uploading the video afterwards if it detects a copyright infringement, which in the case of DJ mixes could be pretty much every time. Another consideration for Facebook Live and more importantly Meerkat is that it could transmit to a public audience, you have better options with Facebook to control this. That means you may get more viewers but less control on who they are. This in turn could open you up to trolling and negative comments as is the way with many online public lobbies, so please be aware of that before you start.

Making your live DJ set public online may run the risk of abuse or criticism, but that should not really put you off. Ideally you need to broadcast on Facebook Live to just your friends and go from there should you wish to open your sets up to a wider audience. It is quite important that you engage with this audience, so if people do comment that you respond in some way to maintain that enthusiasm from the listener. This may have the adverse affect of taking you away from your DJing but is no different to being in a club when people come up to the booth to chat. The main thing to remember is always remain polite.

Think about where you sit your device

One of the bigger issues of broadcasting via video is where you locate your device with the webcam. It can be quite hard finding the right place to locate your tablet or smartphone. You need to make sure that you won't knock it over whilst DJing and that there is enough light to showcase the broadcast, although if you are in a club that is less of a concern. The addition of a fisheye lense will make all the difference, but again this may restrict where you place the device to capture your set. If you are just DJing at home consider which angle you want to use and whether you want to be in shot. Make sure there are no reflections on screen especially if you have any bad habits you don't want broadcasting, often thanks to a reflective window. You might want to put the device above you on a shelf to show just the mixer, turntables or CDJs. The main thing is that you do not try to move it mid broadcast as it can be quite hard getting it back into that perfect place afterwards.

If you are sure you are going to broadcast over the web using Facebook Live then let your followers know in advance. If it is a special set or performance schedule a live event but remember to actually broadcast when the time comes as people will be reluctant to turn up again. Using Facebook Live will actually create a fresh update on your profile page so friends and followers can see that you are online. 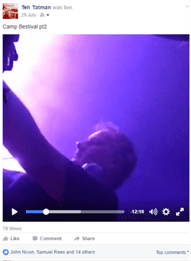 Whatever you do just enjoy it, tools like Meerkat, Facebook Live and future developments by Google have huge potential for DJs and performers. I broadcast recently from a festival I djed at and thanks to a good 3G and power socket was able to relay my set back to friends from across the world. The important thing to remember though is that it is just an add on to DJing. It should not be the focus of your set as that starts to detract from the main job of DJing. It is not essential to broadcast every DJ set and practice you deliver, but even if you just have a couple of friends tune in for a few minutes then you've extended your reach and provided some added entertainment.

Boiler Room has established itself as a truly a global dance and electronic music phenomenon which has delivered DJs, clubs, live shows and documentaries direct to your living room. Now it has launche..

How the LGBT community has shaped dance music

I'm sure readers of this blog will have been shocked and appalled by the Orlando mass nightclub shooting earlier this month. While we have often become desensitized to these events due to their regula..