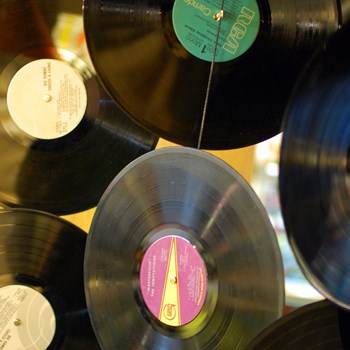 The purpose of Trackhunter is simple, it helps you sort through the wheat and the chaff to discover which of the latest music releases are the ones we should have in your record box or on your laptop. Yet for DJs there are also the killer tracks they've missed, the ones that cost a month's wages, the ones that your peers also want to own. At Trackhunter Towers we thought it would be interesting to look at some of the most sought after 12 inch records on Discogs. This is the first in a series of articles that not only feature the Faberge Eggs of dance music, but also those cheap bargains that may have passed you by.

The criteria we set to compile this first short list is simple, no test presses, dubplates or limited promos that only 5 people in Detroit own. We looked at the cheapest VG+ copy, and how many Discoggers had it in their want list, and refined the search to just the UK. The final criteria was that the record had to have an average rating of at least four out of five. As with anything like this, you will always find some sellers either being cheeky or plain deluded with the asking prices for some records, but in the cases below, they really can ask for big money. There might be a chance that you own one of the records below and didn't realise its true value, so in that case you better get digging in the racks and find that golden nugget.

With two copies For sale, one at £500 and another at $1000 (in shrink wrap) this is certainly something collectors would go that extra mile for. Clarence has recorded under various guises such as Shifted Phases and Lab Rat XL. Yet this electro, techno tinged workout spread out over four tracks is well worth tracking down if you manage to find a copy that is.

The Grim Reaper AKA Keith Palmer AKA Maxim from The Prodigy released most of his content for the latter pair, so most can be forgiven for missing this outing. There were only 500 copies pressed of this four track ep on its own label. With little information on the label beyond a drawing of the Grim Reaper and a telephone number, which we can presume stopped being answered in the last century.

Re-issued in 2014 on the Bureau B label in Germany on vinyl and CD, it is classic German electronica. Schnitzler, or Conny as he was known, was a prolific German experimental musician and was an early member of Tangerine Dream. His membership of the seminal Krautrock group comes through very strongly through this release. Cosmic analogue sounds that drift in and out taking the listener on a 41 minute journey over the course of two tracks.

The galling thing about writing about this track is that I owned this 25 years ago and never one to let a gem slipped from my grasp, I did just that. A DJ friend in London seeing I had got a copy of this sent to me via one of my DJ mailing lists. Also noting I was into Underground Resistance persuaded me to swap it for two of their releases. Quarter of a century on and my two UR releases are worth about £10 in total, The KLF considerably much more. It is nearly 9 minutes of droning, banging heaviness of the very highest of quality. The only consolation is that I picked up the 7 inch of the track for 50p at a record sale earlier today.

Everyone who knows their salt about the classic rave scene of the early 90s will know this. Quite often fans of this track refer to the title as ‘Robin Wants Revenge' as well as the artist, but the killer track is ‘Well Frankie my Son'. Despite having the catalogue number JJR- 102, this is the only release in Discogs on that label. A track that still rocks today, and is a clear nod to the early releases by Frankie Bones and in particular Derrick May with the classic wood bass sound that made Rhythim is Rhythim so important to the development of techno.

What makes this track so important is that it is a rare pure house outing by Detroit's techno genius Jeff Mills. Classic keyboard stabs, clicks and sublime vocals merge with Mills' classic beat production which was released as a sole record on the Axis sub-label Luxury Records.

Vandal releases various tracks under several guises, but this five track ep with no titles stands out price wise. The tracks are tribal, minimal and pretty unforgiving and probably not something you would want to drop halfway through a deep house set.

A classic example of a record that is worth a lot of money on one label and considerably less on another. The original appeared two years earlier on the Underground Level Recordings and goes for something in the region of £50. The re-issue on Buzz released in Belgium fetches three times that amount.

12 inch's older, but smaller sibling, the 7 inch single is usually the more collectable and expensive in the record family. Old rare soul records go for more money than your average family car these days. Yet this one bucks the techno and house trend by being a costly and rare 7 inch release on the Somewhere in Detroit label. Two of Detroit's most respected techno residents go back to back with DJ 3000's being the stand out.

Last month we wrote about the growing number of live events taking place on the web as a much needed pick-me-up for the many thousands who are unable to go out to clubs and festivals due to the ongoin..

Interview with Bill Brewster Part One

Bill Brewster is a name that is synonymous with DJing and dance music in general. Not only did he co-author a superb chronological history of the DJ but he also established the dance music hub that is..

Andy Barton has been one of Techno and Electro’s hardest working men in the past decade. As both scenes have flourished he has beavered away in the background running his Bass Agenda imprint and popul..

In this week's Trackhunter blog post, we pick up where we left off with DJ, historian, writer, promoter, and all round good egg Bill Brewster.